One of the first clay seals arrived intact to this day is that of the tomb of Tutankhamun (1341 to. C), but because of its fragility, even accidental, was soon replaced by another, stronger material: lead. 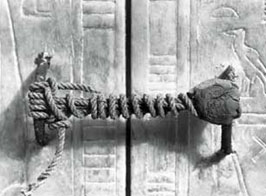 The major disadvantage in using wax or clay seals was in their fragility. In order to avoid this problem the use of lead seals was introduced during the Roman Age. This sealing system consisted in the fusion of a round blank of lead equipped with an internal channel into which a cord had to be inserted to firmly bound the blank and, if necessary, to hang it. In a second time, an iron tool with a long handle was created to mark the seal by the incision laid in the tool end. 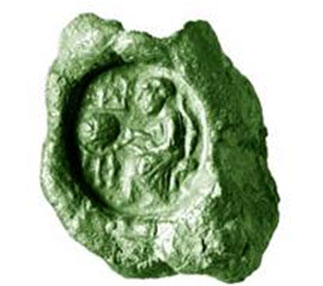 With a very old tradition, the lead seal was used as a mean to close containers of different types and to protect the integrity of their contents, as a way to guarantee the origin of manufactured goods and as a sign of identification of its owner and its properties. 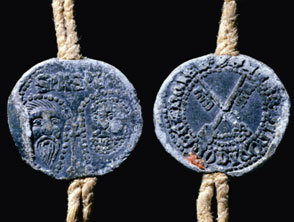 Generally speaking, it is named “lead seal” the system to mark negatively or positively a piece of lead that can be permanently fixed by any wire or string and then moulded by pliers.

In practice, the lead seal with a certain symbolism surpasses by far the system of the authentic signature. In fact the less widespread the writing practice was, the greater the need to use of other means of security and personal recognition was, at the same time requiring to make duplication very difficult.

Metal seals, or bubbles, were usually made of lead; sometimes, but very rarely they could be gold. They were used from the earliest times until the fifteenth century by the Papal Chancery that influenced that of the Roman Empire and that of the Emperors of the East. Lead seals were found also at the Carolingian Registry, starting with Charlemagne; but the oldest extant bubbles go back to Charles the Bald.

Even at the Registry of the German emperors the lead seal was used. We have examples from Otto II to Henry III. Under Otto III the lead seal began to be replaced by the wax seal due to the papal influence.

Even today, the lead seal is widespread in the world. It is still used both as security seal and as decorative seal for handicrafts.

Its real limitation as security seal comes from the fact that with the same pliers an unlimited quantities of seals – one equal to the other – can be produced, and the true guarantee derives from the person who owns the pliers; however even in this case, it is possible today to clone any punch in a short time.

A true security seal must be unique and unrepeatable, i.e. it must have a consequential numbering and personalization difficult to reproduce.